As part of the Welsh Government’s plans to increase public access, enjoyment and participation in Wales’s heritage, Cadw has launched a series of new interpretation experiences at Caerphilly Castle, ranging from sculptured heads of historical characters, to light projections and sound effects, to improve the overall visitor offer of the site.

The castle, which is surrounded by a series of lakes, was built by Gilbert de Clare of Norman descent, and later restored by the 4th marquis of Bute, son of Lord Bute. The new interpretation features take an innovative approach to history, combining art and traditional interpretation techniques, to tell the rich and diverse stories of this slumbering giant.

John Griffiths, Minister for Culture and Sport explains the approach behind the £260,000 interpretation project at Caerphilly Castle: ‘From interactive siege warfare games and innovative touch screens, to models, sculptures and a 270 degree digital film, the new interpretation brings the stories to life, giving visitors an opportunity to learn about the monument in an imaginative and hands-on way.’

Caerphilly has long stood out amongst British castles because of its grandeur and complexity. Once thought to be Roman because of the sheer size of its ruins, it was only in 1834 that the pioneering archaeologist G. T. Clark correctly identified it as a late-thirteenth-century fortress. But while its origins came to be recognized, it is only within recent history that its structure has been repaired and its setting renewed, allowing it to be seen once again as originally intended.

This multi touch table charts the restoration works funded and driven by the Bute family since they took ownership in 1776 and includes: 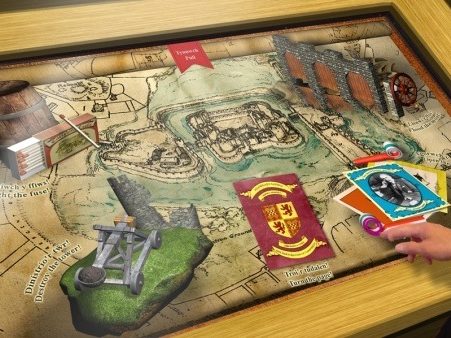 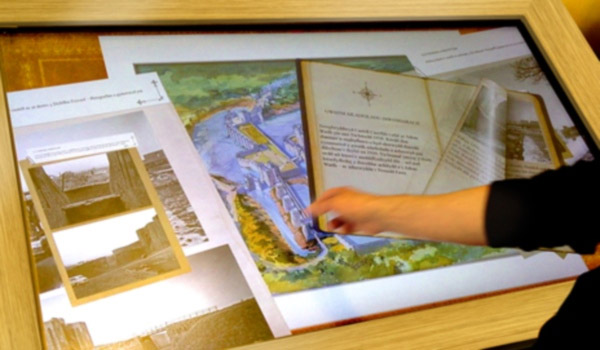 The content is accessed through a number of game interactions each of which are intrinsically linked to the history of the castle. For example the work of the 3rd marquis of Bute is exploded on to screen when the visitor strikes a match from the box the sitting on the table and lights the fuse on the barrel. This is reflection of the defences being deliberately destroyed by gunpowder at some point during the Civil War of 1642–48.

Caerphilly Castle is a complicated site with many entrances, exits and tunnels. One of the interpretive challenges is to geographically locate the visitor within the context of the site when they are inside the many rooms.
One such challenging space is the gateway room where the portcullis would have been raised. A digital reconstruction of the original portcullis has been put in place to identify where the huge iron and wooden structure would have resided when the gates are open. 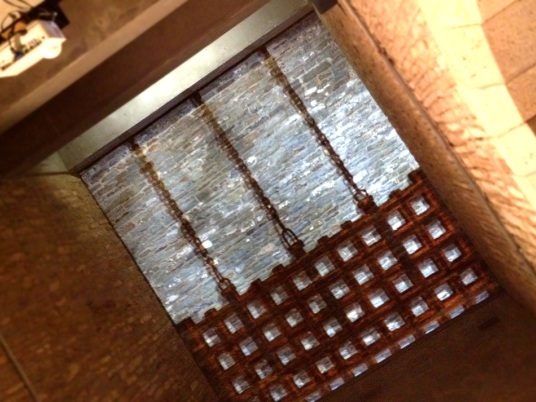 As visitors enter the room they hear the oncoming attackers in the distance and the cry goes up. Suddenly the room moves in to action as the chains are dropped and the vast portcullis drops through the floor to seal the gateway defences.

As well as our own creations for the Portcullis and Multi Touch Table we also provided the AV installation for the amazing ‘digital fireplace’ artwork by Jessica Lloyd-Jones.

Caerphilly Castle is one of the great medieval castles of Western Europe and is second in size only to Windsor. One of Henry III’s most powerful barons, Gilbert de Clare, built the castle in order to secure the area and prevent south Wales falling to Llywelyn the Last.

The castle’s Great Hall was built with fashionable, high-status accommodation and in the medieval period it would have been subdivided with wooden screens, bright decorations with detailed carving and warmed by a large fireplace.
The Great Hall would have been a scene of celebration and feasting and the fireplace would have played a central part in the atmosphere. As part of the restoration work undertaken to reinstate the fireplace a digital fire has been placed in the grate to create a sense of warmth in the vast hall and bring some of the stories of the castle through the flames.

Previous Modern British Childhood
Next Westonbirt Arboretum
We use cookies to ensure that we give you the best experience on our website. If you continue to use this site we will assume that you are happy with it.That's fine